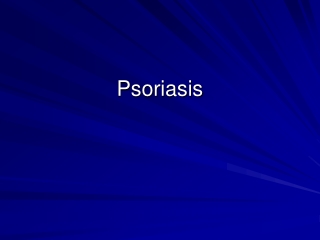 Psoriasis. Background. Psoriasis is an inflammatory, noncontagious, genetically determined skin disorder that most commonly appears as inflamed, edematous skin lesions covered with a silvery white scale. Up to 2% of the population develop Ps during their lifetime. Psoriasis - Is an autoimmune condition that causes cells to build up speedily on the surface of the skin. the extra skin

Psoriasis - . ira bhatnagar. definition/symptoms. psoriasis is a skin condition that causes red patches on the skin and

Psoriasis - . clive tubb cns dermatology. what is it?. psoriasis is a chronic inflammatory skin disease affects 3%

PSORIASIS - . psoriasis is a disease which affects the skin and joints . it commonly causes red scaly patches to

Psoriasis - Is a chronic (long-term) & tenacious skin disorder characterized by too quick growth, maturation and

Psoriasis - . victoria lund. overview. causes skin cells to mature in less than a week (normally it takes 28-30 days) the