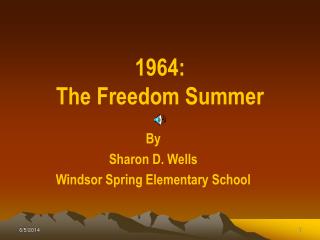 Womens Rights - - Women in the 21st century are thought to have:. freedom from fear. freedom to vote. freedom of speech.

What is cultural history? - . bridget draxler, monmouth college intg: citizenship. why did they come? according to pbs

Bill of Rights - . amendment 1. freedom of speech- right to speak without censorship or limitation freedom of religion-

FREEDOM - . given first to adam and eve. they misused their freedom. but god did not give up on the rest of his children.

Mississippi FREEDOM SUMMER - - . the right to vote and its impact on the civil rights movement. history/social science