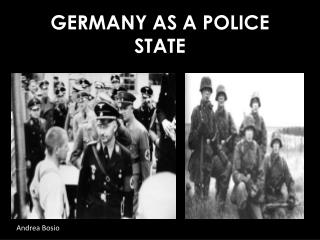 GERMANY AS A POLICE STATE. Andrea Bosio. What was the SS?. private policie and militaries of Adolf Hitler and the Nazi party. It was built by the Nazi ideology. It was command by Heinrich Himmlers from 1929 until 1945. The SS was formed in 1925 and stands for “ Saal-Shutz”. Nazi Police State. - Terror. nazi police state. until 1933 each state in germany had its own police force. by 1936 they

The Nazi Police State - . lesson starter: what actions did hitler take between 1933-34 which made germany less

The Nazi Police State - . lesson starter: what is a dictatorship? how does a dictator maintain their power over

Germany: The Managerial State - . the managerial state is the product of capitalism. it coincides with the sociocultural

Part 2: Police Work as a Profession Chapter 4: Becoming a Police Officer - . this chapter will enable you to….

Sweden as a Strong State - . the successes and failures of the corporatist strategy by: april thomas. sweden as a