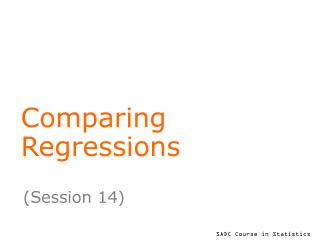 Comparing Regressions. (Session 14). Learning Objectives. At the end of this session, you will be able to understand and interpret the components of a linear model with one quantitative variable and one categorical factor interpret output from such models All Possible Regressions and Statistics for Comparing Models - . animal science 500 lecture no. 12 october 12, 2010.

Regressions and Stata - . basics we will follow what emanuele did but “import” all of it into stata. focus will be

Comparing - . was created in the mid- 1990s by computer programmer pierre omidyar the very first item ever sold by the

Comparing - . the king james bible. by: karen schreiner. to modern versions. how is the english of 1611 different from

Comparing Acid Strengths by Comparing Structures - . look at the stability of the conjugate base. the more stable the

Comparing Printers - . computer concepts unit b. comparing printers. what type of printer should i get for my home or