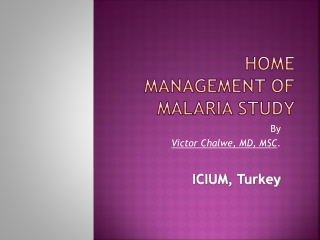 NEW CONCEPTS IN THE MANAGEMENT OF MALARIA

Treatment of Malaria - . treatment. many different antimalarials the decision of which to use is dependent on: setting of

Malaria - . efects of malaria. you can usually tell when someone has malaria as the will have fever, chills, muscle