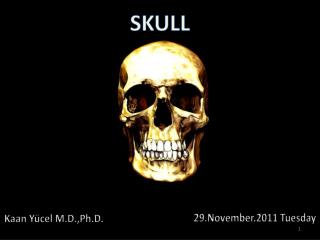 The Skull - . there are 22 bones in the human skull. divided into two groups, the cranial vault and the face. the cranial

Skull Fracture - . definition . is a break in one or more of the eight bones that form the cranial portion of skull

sKULL VALLEY - . you are invited to the perfect place for you and your family june 15 th starting at 7pm we will have a

The Skull - . it consists of flat and irregular bones divides into: cranial bones which encase the brain facial bones

Skull - . objectives. identify the different bones forming the skull with important foramina . differentiate between the

The Skull - . the skull, the skeleton of the head , is the most complex bony structure in the body because it: encloses

The Skull - . by billy joe. image from http://www.nlm.nih.gov/medlineplus/ency/images/ency/fullsize/8915.jpg. facial

Skull - . usually consists of 22 bones, all of which (except the lower jaw) are firmly interlocked along lines called