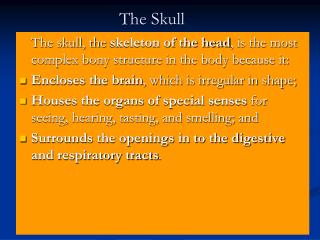 The Skull. The skull, the skeleton of the head , is the most complex bony structure in the body because it: Encloses the brain , which is irregular in shape; Houses the organs of special senses for seeing, hearing, tasting, and smelling; and The Skull - 2. . technical aspects. sitting erect positions are preferred to exclude any air-fluid levels within the

The Skull - . it consists of flat and irregular bones divides into: cranial bones which encase the brain facial bones

The Skull - . by billy joe. image from http://www.nlm.nih.gov/medlineplus/ency/images/ency/fullsize/8915.jpg. facial

The Skull - . there are 22 bones in the human skull. divided into two groups, the cranial vault and the face. the cranial

THE SKULL - . 2 divisions cranium face. most complex bony structure 22 bones in all mostly flat bones, but not all!.

Skull - . usually consists of 22 bones, all of which (except the lower jaw) are firmly interlocked along lines called

SKULL - . human skull. consists of 22 bones 8 of these bones make up the cranium 14 form the facial skeleton. (also 6

The Human Skull - . the skull is made of thin, flat bones that come together in joints called sutures. the functions of