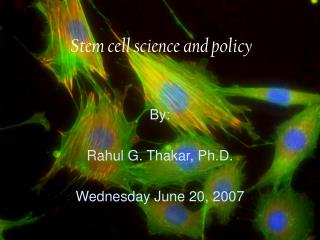 The Science and Ethics of Stem Cell Research - The life sciences revolution in the news. the human genome

STEM CELL RESEARCH - . pros and cons. what are stem

Stem Cell Research - . ruth phillips current events period 5. what are stem cells?. cells can develop into any cell they

Stem Cell Therapy - A treatments for a wide range of diseases and injuries, many of which cannot be treated with

Stem Cell Treatments - Rsci provides health experts for stem cell treatment for their real patients. they guide you with

STEM CELL RESEARCH - . what you need to know. outline of this presentation. stem cell research the nature and promise of