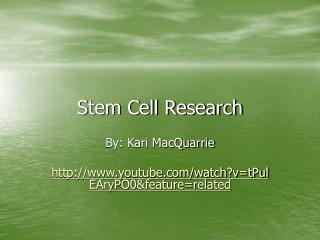 Stem Cell Research. By: Kari MacQuarrie http://www.youtube.com/watch?v=tPulEAryPO0&feature=related. Definition. According to Medical News Today, "Stem cells are a class of undifferentiated cells that are able to differentiate into specialized cell types." Updates in Hematopoietic Stem Cell Transplantation or “Ten Things I learned at ASH to share with you” - . richard t.