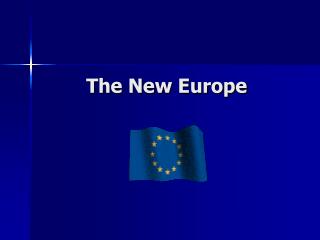 Europe Discovers the New World - . the chapter covers european discovery and exploration of the new world and the impact

Europe and the New World - . 1400-1600. motives: fascination with the east. fantasy literature about “other worlds”;

The new Europe Direct information relays - . the local face of the commission’s strategy for dialogue with citizens.

“The US and the New Europe and Russia” - . “the new europe” &amp; russian political culture the 2008

From the Single Market to the ‘New Europe’ - The european union: economics, policies and history 1st edition. chapter

A New Role of Europe in the New World Order - . student: popova victoria, tsu, 101. describing the world order today we

New Leaders and New Ideas in Europe during the 1930s - . world history. consider the following political candidates and