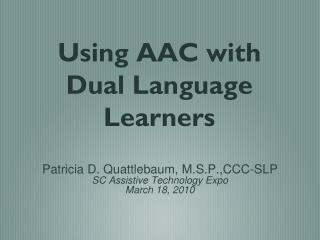 Working with English language learners: - . an overview of policy and practice for educating esl students. important

Reading with English Language Learners - . “we learn language, we learn through language, and we learn about

Dual Language - . a closer look at instruction. by: jennifer brennan kyrias. what is it?. serves language minority and

Using book clubs with learners - . aims. there are two aims to this session: to give a clear rationale and argument for

engaging Language learners with technology uSE - . outline. our goal definitions guidelines the roles of technology. my