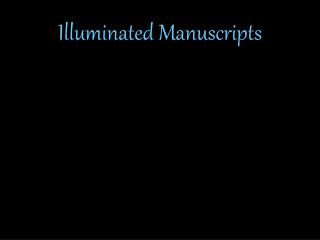 Illuminated Manuscripts - . medieval cards quiz 3. 1. what is feudalism? 2. what is manorialism?. read the handout on the

Illuminated Manuscripts: beautiful but oh so time consuming… - . gutenberg was from mainz, germany he invented a

Manuscripts - . finding the diamond in the rough. images courtesy of the st. louis mercantile library @ umsl unless

MEDIEVAL MANUSCRIPTS - . beatrice mameli beatrice.mameli@studenti.unipd.it. what we will see. story of the book the

Greek Manuscripts - . papyri. paper made from strips of papyrus reed. cheapest, most plentiful writing material – most

Illuminated Text - . the influence of the gutenberg bible. information borrowed from http://www.hrc.utexas.edu. the

Illuminated Manuscript - . any decorated or illustrated manuscript from the western traditions. history. in the most

Illuminated Letters - . during the middle ages clerics and scribes would work tirelessly on pages of manuscripts for the