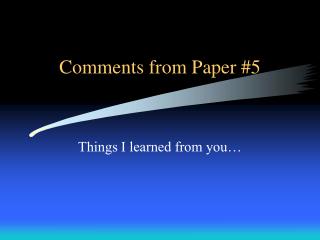 Comments from Paper #5. Things I learned from you…. Three different positions about sport and the moral life. Positive view Comments on the ICT strategy paper: - Most of the important issues for an european ict strategy are covered by the paper

COMMENTS To Katalin Kovacs paper - . land and usage structures and their impacts on rural liveihood in central europe.

A short course on How to write a scientific paper - . lecture:. hamzeh khanpour department of physics, farhangian