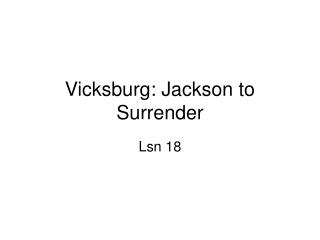 Vicksburg: Jackson to Surrender. Lsn 18. Vicksburg. Jackson. Grant Changes Plan. Success at Raymond convinced Grant to shift his focus from the Confederate railroads to the capitol of Jackson Would allow him to isolate Vicksburg from reinforcements under Johnston. Andrew Jackson Eggsperts - . one person per team will answer at a time (with no help from teammates). when buzzing in,

Andrew Jackson and the Trail of Tears - . just who was andrew jackson?. he was the 7 th president of the united states.

Andrew Jackson - . the defender of “the union” or “the common man”. rant quiz:. the tariff of 1828 is sometime

Welcome to... - Welcome to. and i surrender, all to you, all to you. i’m giving you my heart, and all that is within. i