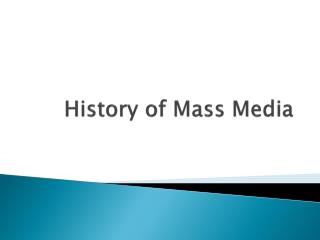 History of Mass Media. What is Mass Media. Mass Media includes several forms of media. Newspaper Radio Television Internet. Growth in the Television Industry. As early as 1862, a still picture was transmitted through a wire. MASS MEDIA - . what is mass media ?. all media technologies used for mass communications organisations which control