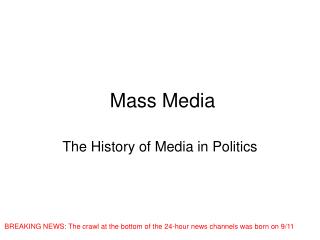 Mass Media. The History of Media in Politics. BREAKING NEWS: The crawl at the bottom of the 24-hour news channels was born on 9/11. What percentage of Americans…. Are black? Are white? Are American Indian? Are Asian? Are of Hispanic/Latino origin? Were born in a foreign country? The Professional Image: The Mass Media and the Image of Nurses and Nursing - . shannon macfarlane jacqueline sy amanda