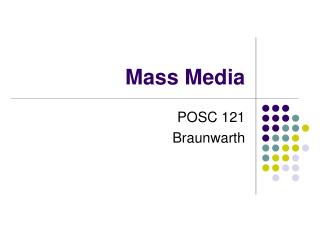 Mass Media. POSC 121 Braunwarth. Ideal Media Functions in Democracies. Provide accounts to the public of political events Contribute to the enactment of policy Guard against the abuse of governmental power. Alienated From Reality. 99.5% of homes w/ electricity have TVs