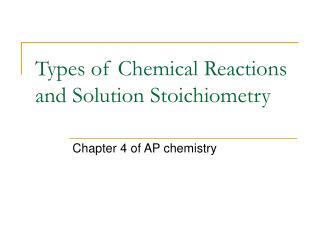 Types of Chemical Reactions and Solution Stoichiometry. Chapter 4 of AP chemistry. 4.1 Water (the universal solvent). Water can be used to dissolve a wide variety of substances. This is in large part due to the polarity of the water molecule. Let’s look at the structure of water. Polarity. The Mole, Stoichiometry , and Solution Chemistry - . h chemistry i unit 8. objectives #1-4 the mole and its use in