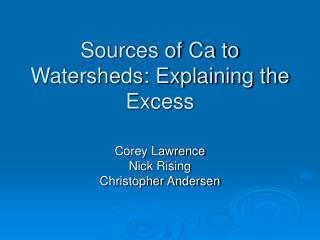 Sources of Ca to Watersheds: Explaining the Excess Sources of Ca to Watersheds: Explaining the Excess

Alternative Energy Sources - . fuels for the future or weaning ourselves off fossil fuels or alternative energy sources

SOURCES OF IRRIGATION - . sources of irrigation. depending upon the availability surface water groundwater rainfall

Water &amp; Watersheds - . water may seem abundant to us but globally is it rare . about 97.5% of the water on the

Documenting Sources: Essentials of APA Format - . produced by: purdue university writing lab adapted for use by:

Pollutants in a Watershed - . 2.3.1explain ocean currents develop and move. 1. how pollutants might flow through a