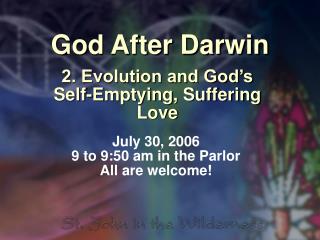 God After Darwin - . 6. evolution and divine action. god our father, open our eyes to see your hand at work in the

God After Darwin - . 3. evolution and the great hierarchy of being. god our father, open our eyes to see your hand at

Chasing After God - . to chase-to pursue run after. to follow as to catch.some bible scholars believe psalm 63 was

God is after our hearts - . expository teaching on mark chapter 7. a) pharisees and their traditions &amp; hypocrisy

Darwin - . 1809 - 1882. key work. theory of evolution by natural selection. all individuals of a particular species are

DARWIN - . darwin: the early years. charles darwin was born to an upper class family in 1806 and was the 5 th of 6