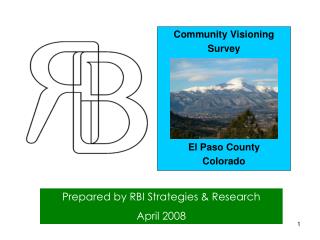 Community Visioning Survey El Paso County Colorado Prepared by RBI Strategies & Research April 2008 Methodology 502 telephone interviews were conducted among El Paso County Residents over the age of 18. The margin of error for the sample is +/-4.35% at the 95% confidence level.

Embracing Tier 2 {...and all the mCLASS sweeties with yellow dots} - I prepared this presentation for a nearby elementary

Marzano’s Essential 9 High Leverage Instructional Strategies - . objectives. by the end of the session you will...

Clear Learning Targets - . how to deconstruct the standards! developed by regional teacher partners with the pimser p-12