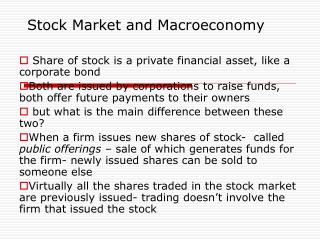 Stock Market and Macroeconomy Share of stock is a private financial asset, like a corporate bond Both are issued by corporations to raise funds, both offer future payments to their owners but what is the main difference between these two?

Poverty and the Macroeconomy - Tnp2k and seadi: conference on poverty alleviation in indonesia jakarta, june 12-13, 2013

Stock market - Stocks can also be categorized in various ways. one common way is by the country where the company is

Stock Market - . 14 year old investor. what are some of your favorite companies?. what is a stock?. a stock is a share in

Stock Market - . why do we need the stock market?. 1700’s most businesses were small family owned businesses they had a

Stock Market - . chapter 7 review. where you take chances and either get rich…. or loose it all!!. the rules:. everyone

STOCK MARKET - . two things to do with money. save. investment. income today that allows future benefit. income not used