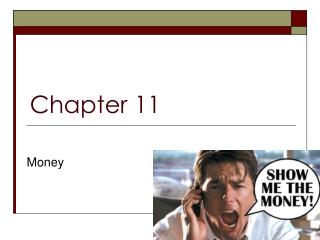 Chapter 11. Money. Money. MONEY (def): any commodity or token that is generally acceptable as a means of payment What are the functions of money What does money do? What are the characteristics of money? What can be used as money?. What’s it worth?. Yasin’s Shirt? Sammy’s Shoes?