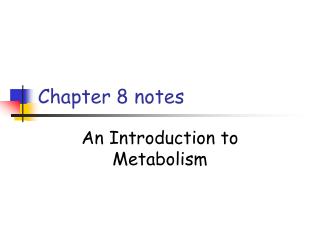 Chapter 8 notes. An Introduction to Metabolism. Concept 8.1. Metabolism : the totality of an organism’s chemical reactions A metabolic pathway begins with a specific molecule and is altered into a product - each step is catalyzed by an enzyme. Concept 8.1. Chapter 8 Notes - . place these notes into your geology notebooks. the lithospheric plates of the earth are rigid and

Chapter 8 Notes - . a regression line is a straight line that describes how a response variable y changes as an

BUA321 Chapter 8 Class notes - . risk and return. if you are thinking of investing in a stock, what things would you