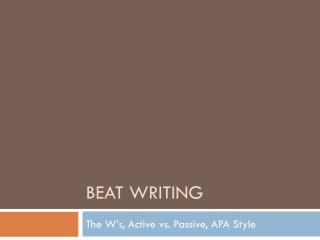 Beat! Beat! Drums! - . walt whitman. list of all the ways that war is presented as a destructive force in the poem.

Beat - Beat poetry evolved during the 1940s in new york city, and the west coast (primarily parts of california) the end

Beat - . by: marc hnatyshin an adam cooke. what is beat?. the beat generation was a group of post wwii writers that

BEAT FATIGUE - This was the time before there were any real answers. where fatigue was usually overlooked and put into

BEAT REPORTING - . choosing and covering beats to maximize news. what is a beat ? . simply, a beat is an area or topic of

Summer Beat - . ideas. students can have recorded on their switch the repeated page “ the sun is shining and the

Beat It - . they told him don't you ever come around here don't wanna see your face, you better disappear the fire's in

Beat reporting - . tips and techniques. what is a beat?. a beat – a specific area or topic you are assigned to cover.

Beat Analysis - . what is a beat?. a beat is the smallest unit of conflict. sequences of beats create a larger conflict.