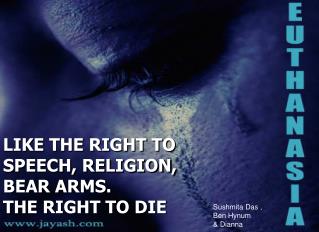 LIKE THE RIGHT TO SPEECH, RELIGION, BEAR ARMS. THE RIGHT TO DIE. Sushmita Das , Ben Hynum & Dianna. FACTS. People in US have been dying with suffering and pain. But there is no one there to help them or to save them. The Right to Bear Arms - . the original

Should individuals have a right to bear arms? - . people use guns

The Right to Bear A rms - . by brian, jam es and kyle. the second amendment. “a well regulated militia, being necessary

The Right to Bear A rms - . by brian, jam es and kyle . the second amendment . “a well regulated militia, being

Right to Die - . right to die. choices for dying patients and their families due to technology what constitutes a “good

The Right and Duty to Die - . quinlan. how does the court justify the right of a competent person to refuse medical

Right Action Right Speech - Spiritual principle: to speak only good; allowing god to speak through oneself.

ABORTION The Right to Choose versus The Right to Life - . by david stevens, m.d., m.a. (ethics) chief executive director

The Right to Vote - . how can we persuade eligible voters to go to the polls on tuesday, november 4 th ? this image comes

The Right to Vote - . history of voting . the framers of the constitution purposely left the power to set suffrage

The Right To Vape - Smoking e-cigarettes has evolved into a sport, a subculture, and a political movement as scientists

The Right to Information - . can every thomasina, dirk and harriet get it online from libraries ? brian hardy vision