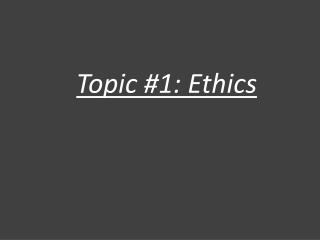 Topic #1: Ethics. 1. the study of standards of conduct and moral judgment; moral philosophy 2. the system or code of morals of a particular person, religion, group, profession, etc. Ethics. Is it ever ethical to…. WIKILEAKS. How to select a topic for your Dissertation? - Get some easy steps here for choosing your dissertation topics suggested

Moving from a topic to a question to a working hypothesis - . find a question in your topic. brainstorm to get research

Structure of a Topic Sentence - . egl 101. function of a topic sentence. tells reader about a single paragraph’s

Topic - . your name. slide 1 introduction: i-search “why is this topic important or interesting to me?. think about how

Topic - . names date. hawthorne studies (elton mayo). what? a series of experiments on factory workers when? 1924 –