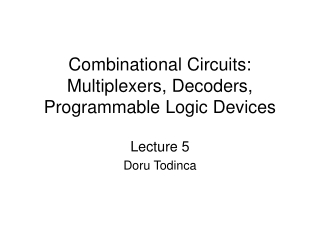 Combinational Logic Circuits - . is the logic circuit where the output always depends on the inputs irrespective of the

Decoders and Multiplexers - Decoders. a combinational circuit that converts binary info from n inputs into a max. of 2n

Programmable logic devices - . pla circuits built around homogeneous arrays of elementary components that can be