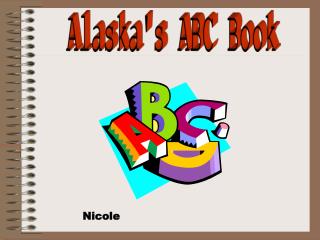 Alaska's ABC Book. Nicole. A. A is for Alaska. Alaska is a Neat state in North America. It is mostly below zero there but sometimes it is nicer there than it is here. Alaska’s State Capital is Juneau. B. Chapter 7 - . entering the world stage. starter #1: tuesday 10/16. read the inside story, why did the united states buy

The Arctic ABC Book - . presented by class 3-8 west middle island elementary. a is for alaska. alaska has 17 of the

Alaska - . created by angela williams for edci 5314. this presentation will present basic information about the state of