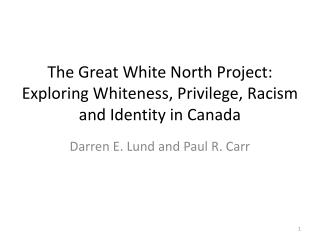 The Great White North Project: Exploring Whiteness, Privilege, Racism and Identity in Canada. Darren E. Lund and Paul R. Carr. Anti-racism, two White guys and an elephant in the room. Overview. Paul: What is Whiteness, and why does it matter? The Pitiable Poor : Classism and Racism in Ruby Payne’s Framework - . by paul c. gorski at the white privilege

Thank you for choosing Great White air-Ways - . we are enroute from athens, greece to new york city, ny. your captain

Color Blind Racism - . in this presentation you will learn the answers to the following questions; does racism still

Racism in America - . racism. “ the prejudice that members of one race are intrinsically superior to members of other