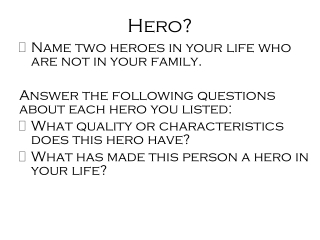 Hero?. Name two heroes in your life who are not in your family. Answer the following questions about each hero you listed: What quality or characteristics does this hero have? What has made this person a hero in your life?. Epic Poem or Story. A White Heron - Caitlyn &amp; andrea. a white heron. “today i have grown taller by walking with the trees.”

My war heros - . by: bryan khoo. the real war hero of my eyes. about