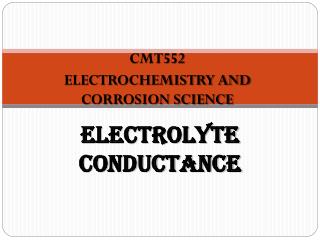 ELECTROLYTE CONDUCTANCE. CMT552 ELECTROCHEMISTRY AND CORROSION SCIENCE. What is electrolyte?. Any substance that produce ions when dissolved in a solvent (usually water) is an electrolyte. It is the electrically conductive solution that must be present for corrosion to occur. Conductance Model - . laurence benjamin. over view. historical development of the model growth and the environment