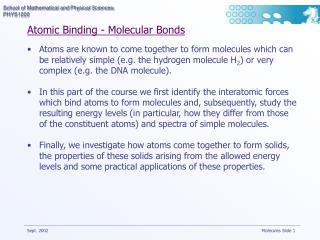 Atomic Binding - Molecular Bonds. Atoms are known to come together to form molecules which can be relatively simple (e.g. the hydrogen molecule H 2 ) or very complex (e.g. the DNA molecule).

Atomic Bonds [aka chemical bonds] - . what is a bond ? so what is an atomic bond? an attractive force between 2 atoms.

Atomic and Molecular Orbitals - . recall the following principles from general chemistry. the horizontal rows of the

Atomic and Molecular Orbitals - . structure and properties of organic molecules. electrons act as both particles and