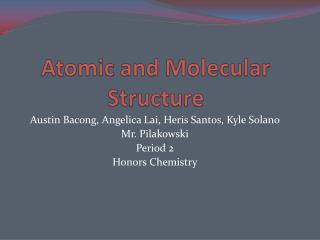 Atomic Structure and Atomic Notations - . decide whether each of the following statements concerning atoms is true or

Atomic and Molecular Orbitals - . recall the following principles from general chemistry. the horizontal rows of the

Atomic and Molecular Orbitals - . structure and properties of organic molecules. electrons act as both particles and

Atomic Structure - . composition of the atom. there are three subatomic particles which make up the atom: protons

Atomic structure - . outcomes:. you must be able to describe what an atom is made of and how atoms of an element are

Atomic Structure - . spectra of science miss amole. by presentermedia.com. what is an atom?. simplest unit in an element

ATOMIC STRUCTURE - . chemistry glossary. pure substances – when only one type of element or compound is found in a

Atomic Structure - . review for quiz. the nucleus is made of protons and neutrons and has a negative charge. the nucleus

Atomic Structure - What is an atom?. atom: the smallest unit of matter that retains the identity of the substancefirst