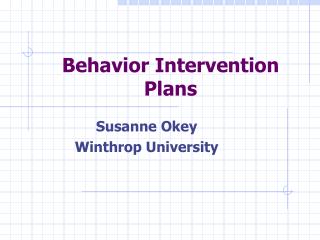 Behavior Intervention Plans. Susanne Okey Winthrop University. Purpose of FBA’s and BIP’s. To gather the necessary information so that we can “develop effective strategies to address those behaviors that interfere with learning and threaten safety.”. FBA’s and BIP’s. A team effort. FBA’s.

Creating visual behavior plans and Intervention materials - Our goal today. take the perspective of individuals who are

Behavior lesson plans - . acknowledgements. portions of this presentation were adapted from work and presentations by the

Positive Behavior Intervention Supports - . a case study on pbis use and effectiveness at a juvenile detention center.