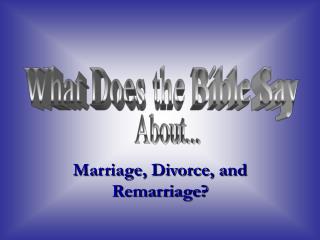 What Does the Bible Say About... Marriage, Divorce, and Remarriage? God’s Marriage Law Given in Gen. 2:21-25 God “brought her unto” Adam God performed the first wedding! God’s Marriage Law: Leave father and mother Cleave to his (one) wife Twain shall be one flesh Matthew 19:3-6

Contractual Aspects of Marriage and Divorce - . chapter 12. marriage and the law of contracts. marriage : legal union of

Matthew 7:12 - . so whatever you wish that others would do to you, do also to them, for this is the law and the

same sex marriage - . and morality. the fundamental argument. the basic rationale for marriage would apply equally to

MARRIAGE - . marriage. how many of you would like to become married on completing school? can you give reasons why you

What Is A Lawful Marriage? - “really married” or “accomodatively married”. sexual intercourse. “benefit of

Sex, Love, and Marriage - . on the place of sex in human existence —immanuel kant the main purpose of sex is