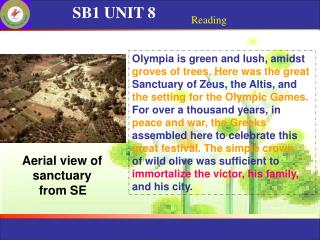 SB1 UNIT 8 Reading Olympia is green and lush, amidst groves of trees. Here was the great Sanctuary of Zeus, the Altis, and the setting for the Olympic Games. For over a thousand years, in peace and war, the Greeks assembled here to celebrate this great festival. The simple crown

The Cell SB1.a - . ned. what is the cell?. the basic unit of all forms of life. living matter enclosed in a barrier.

Unit 8 - Part a: exercise. 1.q: why did the man say sorry?because he dialed the wrong number.2. q: why did linda say

Unit 8 - . punishments and investigations. arrest. an arrest takes place when a person suspected of a crime is taken

Unit 8 - . learning a foreign language. revision. find a new word in this unit to match the definition given. awful. 1.

Unit 8 - . introduced two of the three key aspects in any programming language structuring of data statements and

Unit 8 - Book p.14. unit 8. we can make things. we love to make things whenever we can. we collect odds and ends like the

Unit 8 - . dealing with problems. objectives focus warming up 8.1 what seems to be the problem? 8.2 we all make mistakes