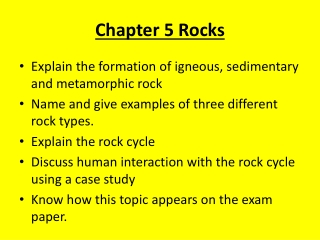 Chapter 5 Rocks. Explain the formation of igneous, sedimentary and metamorphic rock Name and give examples of three different rock types. Explain the rock cycle Discuss human interaction with the rock cycle using a case study Know how this topic appears on the exam paper. Chapter 5: Igneous Rocks - . big idea. igneous rocks were the first rocks to form as earth cooled from a molten mass to

Sediments and Sedimentary Rocks Chapter 5 - . concepts you will need to know for the exams. weathering erosion

Sediments and Sedimentary Rocks Chapter 5 - . concepts you will need to know for the exams. weathering erosion

Minerals: Building Blocks of Rocks ~Chapter 5 ~ ^_^ - . minerals: the building blocks of rocks . definition of a mineral

Chapter 4 Rocks - . classifying rocks. section 1. why must scientists who study rocks look at the inside of them?.

Rocks Chapter 4 - . p. lobosco. the rock cycle chapter 4, section 1. objectives: distinguish between a rock and a

Chapter 4: Rocks - . what is a rock?. a rock is a mixture of minerals, mineraloids , glass, or organic matter. 3 main

Chapter 3 - Rocks - . test wednesday. which of following is not one of the three classes of rocks? . igneous metamorphic

Chapter 3 - Rocks - . think about this… why do we study rocks??? what can be learned by studying rocks??? well…