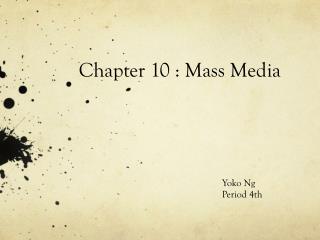 Chapter 10 : Mass Media . Yoko Ng Period 4th. What is Mass Media ?. Mass media is media that is intended for a large audience. It may take the form of broadcast media, as in the case of television and radio, or print media, like newspapers and magazines . Chapter 10 Media - . in this chapter you will examine the historical evolution and present status of relations between

Mass media - . bill, sydney,austin. what is mass media?. mass media consists of the various means by which information

Mass Media - . influences and impressions from media bias in media influence and control of media. different types of

Mass Media - . overview for the year. the relationship between ownership and control of the mass media. • private and

Mass Media - . by: a shleyy. 3 problems. researchers argue that it is the physiological effects of media violence that