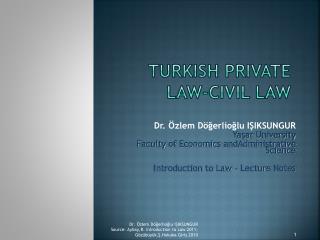 Civil Law - . eq: what is civil law?. v. v. lawsuits may encourage business to protect employees – but not always.

Civil Law - . two kinds of civil cases. negligence suit- filed when someone’s carelessness is the reason for another

Civil Law : - Moral – duty of care, morally acceptable for an organisation to seek to reduce accidents and injuries.

Civil Law 3.1 Intro To Civil Law - . torts: a civil wrong. in civil law, when a person commits a wrong, we call it a tort

International Private Law - . introduction. that part of law which come into operation whenever the court is faced with a