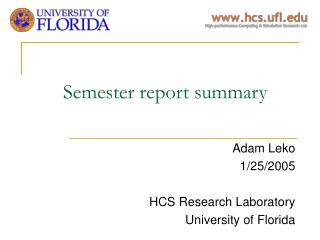 Semester Summary - . tyler pollock. kids in inner-city schools don’t care about school. it is useless to invest so much

AP Biology Semester One Summary - . mrs. hunt – st. john bosco hs. what are the 5 topics you believe you understand the

QCD Summary Report - . s. ellis u. of washington. “gee, i sure hope joey wrote me a good talk.”. sm physics. before