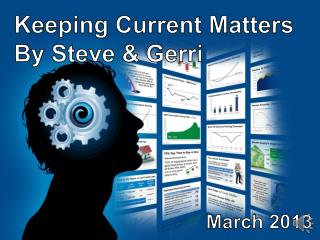 Six Quick Tips to Present like Steve Jobs - Steve jobs was one of the greatest presenters of our time. his strength was

Advice That Matters: - . what do students hear and remember? …and transformation, too!!. advising is the only

Chapter 7 - . leading effectively. steve jobs. the challenge of leadership. steve jobs has been called “a classic

Thank You for your sponsorship - . tippecanoe &amp; marketing too learning from politics that can turbo charge your

“You Want Me To Research WHAT?!?” (Getting Background &amp; Keeping Current) Jennifer L. Behrens Research - 9.

Disciplinary Literacy: Why it Matters and What We Should Do About It - . elizabeth birr moje national writing project

Creation / Evolution - . does it matter what we believe?. topics. two models of history 7 biblical truths why it matters