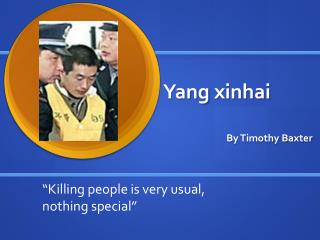 Yang xinhai. By Timothy Baxter. “Killing people is very usual, nothing special”. Serial Killer. A serial killer is someone who kills multiple times. Most of the time a serial killer did not have a normal childhood Yang Wang - Hiv/aids research progress and prevention for men who have sex with men (msm) in china and the united states.

Yang Fudong - . . ..pafoua xiong. who is this individual who refers to himself as yang fudong?. mr. fudong. yang fudong