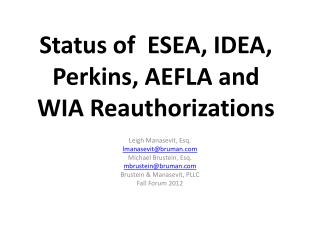 Shifts in the Law . . . Alignment of ESEA and IDEA - Problem-solving &amp; response to instruction/intervention may,

WIA Reauthorization - . an opportunity to build support for intermediary organizations. building support for

ESEA Reauthorization - . the silence is deafening last year at this time i said senate bill would go to floor in