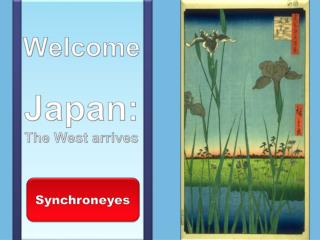 Welcome Japan: The West arrives. Synchroneyes. Warm-Up . Tea Time with Tokugawa. 3 min . with a partner. Terminology. The bakufu = Japan’s system of government during the Tokugawa period, based on a military leader, the Shogun Japan - . reading: page 1 answers: worksheet 1. japan is about the same size as the state of: california. japan has a

IMPERIALISM IN JAPAN - . essential question : what was the impact of western imperialism on japan?. nationalism can be