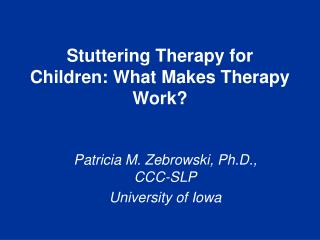 Stuttering Therapy for School-Age Children: What Should Be Changed and Who Decides - Learning objectives for

Art therapy for children with autism - . communication sense of self relationships sensory awareness. …we are totally

What is Art Therapy? - . by: lynn marie saso. contemporary art therapy: the connection between art, healing, and public

What is Music Therapy? - . it is the skillful use of music and musical elements by an accredited music therapist to

What is Therapy? - . ap psych ch 13. therapy. refers to a wide variety of psychological and biomedical techniques aimed

What is ... Gene Therapy? - . genes. specific sequence of bases that encode instructions on how to make genes. genes are