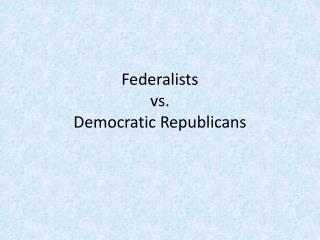 Federalists vs. Democratic Republicans. Early Formation of Parties. Parties first formed to deal with the ratification of the Constitution 1787-1789 Federalists supported the new Constitution and felt its increased powers would be good for the country

Election in Uttar Pradesh - In the biggest democratic exercise on the planet this year, voting gets under way in uttar

Clinton vs Trump since the conventions - The republican and democratic presidential nominees have traded barbs, insults

Inside the Democratic Forces of Syria - On the battlefield with the u.s.-backed syrian rebel

The Electoral Process - . fair game or stacked deck?. i. gerrymanders: the fix is in?. original gerrymander named for

Welcome - . greg haglin. introduction. tom johnson. if we can put a man on the moon – delivering “better, faster,

The Electoral Process - . fair game or stacked deck?. i. gerrymanders: the fix is in?. original gerrymander named for

The “Melting Pot” vs. the “Salad Bowl” - . people who “want to live in more diverse communities”. more