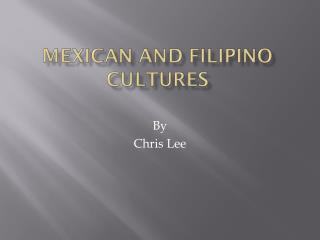 By Chris Lee. History of Mexico and the Philippines. Mexico was first populated more than 13,000 years ago. In 1519, the Spaniards, led by Hernando Cortez, defeated the Aztecs, and established the region as a spanish colony. Mexico achieved its independence from Spain in 1810. The Response of Marine Boundary Layer Clouds to Climate Change in a Hierarchy of Models - . chris jones department of

To Slot or Not to Slot? - . chris bray chris.bray@btconnect.com. definition. to slot is to expose a blot to an immediate

Backstage with Chris and Casey - . the coached criticized the player for missing the basket. criticize. tell what you