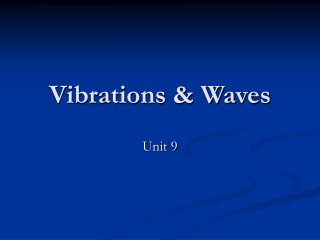 PWV. Waves and Vibrations Benchmark 1 - . relate characteristics of sounds that we hear to properties of sound waves.

Waves - . what is a wave. a wave is a disturbance or variation that transfers energy progressively from point to point.

Sound Waves and Pressure - . investigation one. sounds. sounds are generated when any solid, liquid, or gas vibrates

Waves - . unit 11. vibrational motion. wiggles, vibrations, and oscillations are an inseparable part of nature. much of

Properties of Waves - . chapter 12 section 3. what is a wave?. ripple waves in water are formed by the vibrations of

Vibrations and Waves - . a motion that repeats itself in constant time intervals is called periodic. harmonic motion. -