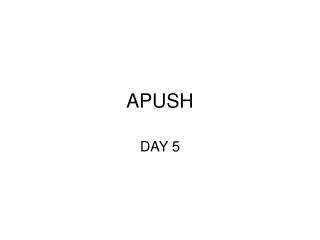 APUSH. DAY 5. The Rise of "King Cotton". Prior to 1793, the Southern economy was weak: depressed prices, unmarketable         products, over cropped lands, and an unprofitable slave system. APUSH DAY 6 - . or…the era of forgettable presidents…. index to this page bill of

APUSH - . bell work…. the convention. bell work questions. 1.what were some of the events that led the new united

How To Do an APUSH - . dbq. a “dazzling” dbq is like a tasty hamburger. the introductory paragraph. the “top bun”

Writing for APUSH - . do the things that will earn you high marks with college board readers. what is included in the

APUSH – October, 4 th - . objectives: to demonstrate your understanding of the two readings to apply your previous

Welcome to APUSH- Let’s do a little lesson on POV - . yes, class that’s right “point of view”. introduction to